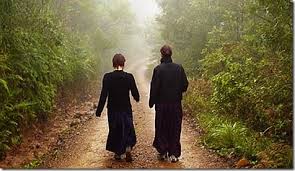 As a sequel to my earlier post Walking Meditation,  I have also taught my students how to incorporate two powerful Buddhist mantras – Om Ah Hum and Om Mani Padme Hum – into this exercise.

Basically,  we use the colors and vocalization of the mantra as we walk meditate and trace the footsteps.

First,  with the left foot forward,  we chant Om – visualizing a White foot step,  next Ah the red right footstep and Hum the left blue footstep.  You can continue practicing it until you are very familiar with the method.

Next,  you include the 6 syllabi Mantra Om Mani Padme Hum,  immediately after the 3 Syllabus Om Ah Hum.  After working on the Hum of the Three Syllabus mantra,  you take a break of one right step forward without doing anything.  Then,  back to the tracing the left footstep imagining it as a white color footprint as you chant Om.  Next,  you follow up with your right footstep red in color and chanting at the same time Ma. This is followed by the left foot step yellow in color along with the third syllabus Ni,  right footstep Green color with the fourth syllabus Pad, left footstep Blue color with the fifth syllabus Me and finally the right color footstep Black following the last syllabus Hum.  So it is   White,  Red,  Yellow,  Green,  Blue, and Black.  The other variation is White for Om,  Green for Ma,  Yellow for Ni,  Blue for Pad,  Red for Mi,  and Black for Hum.  Right from the beginning, I have been more familiar with using the first variation.

It would be difficult to concentrate when you first start off trying the walking meditation incorporating the mantra. But over time you shall master it and perform the exercise with ease.  Continuous practicing of the mantra will not only helps in concentration but also will strengthen your protection against negativity.

One thought on “Using Mantra In Walking Meditation”