Following this principle of quartz having a high level of vibration frequency, it is possible that when working with quartz, specifically we could increase your own energy vibration by a minimum of 2000 cycles per second. And,  as I have often advocated that the use of quartz and natural stones would also bring about higher chances of attracting fortune and windfalls since they help cleansed away our negative energy and elevate our overall vibration.

Natural quartz and some mineral stones by virtue of their inherent physical structures constantly emit higher electromagnetic forces (EMF).  Wearing them or even carrying them along with us is sufficient to help raise our personal vibrations.  I love quartz, especially laser double terminated, elestial (skeletal) and amethyst.  But the stones which I have often been practicing with are from the meteorite family – tektite, moldavite, and nickel meteorite.

These stones work according to the principle of sympathetic resonance, just like sound vibrations.  When we wear them, their vibration resonates and leads our body’s vibration to go as fast as theirs.  One method of meditation I often do is to practice with these stones in my hands, and as I relax I begin to feel them out and attune my body’s vibrations to them.  I would try and maintain my consciousness on these higher vibrations.  Consistent meditation with stones would help us clear some of our energy blockages which are of lower vibration frequencies and help raise our personal vibration.

Now, besides helping us to raise our personal vibrations, quartz can also amplify our thoughts.  The vibrations produced by our thinking process is weak comparatively – 14 to 21 cycles per second at Beta level,  and hardly exceed 50 cycles per second.  So, when we perform energy work, using our mind to focus, to visualise and create thought forms, we should use quartz to help amplify these mental efforts, and the results would be more effective.  One example of using quartz to amplify our thoughts is to enhance our consecrating/blessings of objects such as pendants and talismans.

For example, in doing remote healing, we are sending healing energy across the space dimension.  Say, if we use quartz to help “turbo-charge” our thoughts in channeling those energies, we suppose the healing sessions would be more positive.

One way to do it is to hold a crystal in your left receiving hand and will the quartz to raise the vibrations of your body and along with it your thought energy.   The other way is to hold a crystal in your right projecting hand, visualize your thoughts and intentions are charged up and transmitted through it.  Or, you can combine both methods, using quartz to both raise your body vibration and to project the charged up thoughts simultaneously.

A word of caution on the use of stones –  do not wear too many stones on your body for a prolonged period or sleep with too many of them at one time.  As we race to synchronize with the higher vibrations of these stones, we use up energy from our physical and subtle bodies.   As a result, though we are vibrating faster along with these stones, our own energy level becomes depleted and without sufficient rest, we would not be able to recharge the used up energy in time.     When we do not have enough energy for use in our vital body systems, we become weak and fall sick.  So the practice with higher vibration stones must be done gradually so that our body can slowly learn to adapt to them. 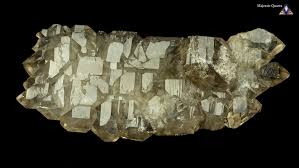 For those who perform energy healing, they tend to get contaminated by the negative energies of those persons whom they are trying to help cure, especially when they are in close proximity.  Energy healing would also tend to deplete their own energy.  One method I have learned is to make use of that quartz with irregular surface called skeletal or elestial quartz. Elestials are known to assist in mass cleansing, healing, and reawakening.   Other stones that are also useful in shielding us against negative energies include obsidian, hematite, black tourmaline or tektite.

One of my favorite tool for channeling is my Tektite Wand,  which I use a copper rod to connect two very powerful meteorite:  Tektite.   I have since replaced the tektite at the tip with a double terminated Szechuan quartz.

2 thoughts on “Amplify Your Energy And Thoughts With Quartz”