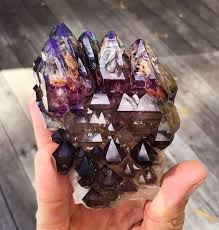 Comment from Creedlcion:  “I’ve been wearing amethyst pendant near my chest for almost twenty years and noticed there are many times when I felt this continuous rocking sensation, even though I’ll just be sitting still doing nothing. It was a pretty rhythmic, heavy dub-dub feeling accompanied by a buzz, and despite changing the amethyst once for another, the sensation remains pretty similar.

The first amethyst was lighter in color and the feeling was stronger than the current one (which is much darker). The beat rhythm was very similar for both, so I thought this was how all amethysts felt like, until reading this article. I realized that what I felt was the combined feeling of stone vibration applied to my own.

After trying out the pulse sensing method you’ve described, I start to differentiate the vibrations a bit more and realize the heavy beat was mainly my pulse, and the slight numbing buzz was due to the quartz. The buzz was also quite consistent. Now I understand why I just can’t seem to feel anything other than the beat when holding a darker stone.. Too used to the buzz sensation to sense the more subtle low vibrations. So just want to thank you for this knowledge, as well as the recent list of bookmarks posted. They were really insightful.”

My Response: Thank you very much. I am elated that my write-up  has helped unravel your senses to feel more accurately the vibration of quartz. Next level up is to feel how the different stones resonate with your chakras. In this instance, the amethyst is supposed to stir your Brow or Third Chakra, and helps improve your intuitive ability. Keep it up and learn other finer points in energy vibration